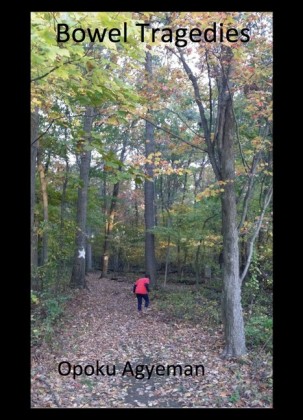 This is a compelling story of the multiple woes that befall a precocious and desperately lonely child growing into adulthood in a world devoid of tolerable toilet facilities. It deals with a very real, admittedly unpleasant, problem that plagues human existence in the underdeveloped world. It is a manifest law of nature that what goes into the stomach must come out, sooner or later, as body waste. But what happens where bearable, basic facilities for discharging this excrement are nonexistent? Amfriyie, our tragic hero, grew up in a world where there were absolutely no dignifying alternatives to the loathsome pit latrine. Following his first experience of its degradation, he swore to never again use one. But as his only remaining option of resorting to hidden corners in the open air proved to be increasingly untenable, his life quickly became a virtual battleground between needing to eat and refusing to eat sufficiently. The inflexible Amfriyie became terribly alone. Solidarity and sympathy were scant in a world where everyone except him managed to make a virtue of necessity of the detestable pit latrine. His inevitable destiny was physical and emotional collapse.

The atmosphere was perfectly exhilarating. There was pomp and majesty, a blaze of color and royal pageantry. Umbrella carriers, horn blowers, drummers, and stately courtiers swirled around the Odikro , the traditional chief, as he held court in public at the very center of town called Asafobia . The custom-steeped Odikro wore a resplendent Kente cloth and sported intricate gold ornaments around his ankles, fingers and neck. The sun shed its rays gloriously and generously from above, adding to the radiance of the occasion. Encircling mimosa trees swayed rhythmically to an unexpectedly robust afternoon breeze, and birds chirped away rambunctiously. An effervescent throng of people, including a noticeably large number of strangers of pale skin, jostled excitedly. The little boy, Amfriyie, wanting to be a part of all this, had risked climbing a tall tree overlooking the Asafobia . From this perch, he took in the spectacle of human joy and excitement unfolding underneath. He had never before, in his short existence of six years, viewed the world in such festive light. In response to this theater of sights and sounds, he felt a frenetic energy seething inside him, beckoning him to embrace this wonder of life, to partake fully of its seemingly boundless richness, beauty and joy. And yet all he really could think about was the annoying agitation in his bowels.

For some time now, it had become habitual for him to eat and drink very little in order to reduce the need to urinate or defecate. In the morning of this day of festivity, he took in only a few spoonfuls of porridge and a tiny slice of bread. But all that precaution did not help. The physical signal he was receiving was unmistakable: he had to go. He closed his eyes, clinched his fists, and let out a high-pitched scream of protest. If there was one thing that instantly dampened his outlook on life, it was this bodily necessity, this iron-clad law, to discharge what one ate and drank from the body. Any thought of the workings of the bowel and bladder jolted him to the core. He thought of himself as a reasonable boy and he accepted the logic that what goes in must come out. What he absolutely could not cope with was the absence of decent toilet facilities in his world.

The best facilities available to Amfriyie in the land of his birth were pit latrines. These came in two unpalatable forms. There was a huge, monstrous version designed as bottomless pits for public use, and there was a smaller kind made of wooden boxes with holes in the middle linked to aluminum buckets underneath for private use in homes. In the homes that were lucky or unlucky enough to have them, the atrociously foul receptacles would remain in place until they filled up with discharged human waste. To get near the public or private kind of this monstrous contraption was to be exposed to horrid, unbreathable air. The boy could not, and would not, abide them, and he felt deeply perplexed that others around him seem to have come to terms with the suffocating, life-choking, dignity-strangulating devices. Being about the only one who could not tolerate them meant that he had no one with whom he could share his horrible predicament. He had to suffer alone in a largely lonely existence.

The loneliness and the underlying perplexities of his existence were enough to turn a tiny, feeble child into a mental adult. He could not stop eating or drinking if he wanted to remain alive. And yet he had no convenient means of doing away with the piss and pooh that of necessity resulted from eating and drinking. From his infant years his life was filled with endless anxious obsession over where his next bowel movement was to occur. The absence of toilets induced an intensive, pervasive, and relentless anxiety that congealed into a delicate struggle for survival and sanity played out on a daily basis.

Down at the Asafobia the court linguist,