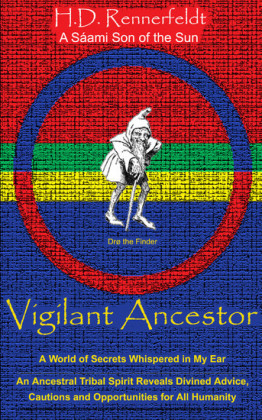 'Everything should be made as simple as possible, but not one bit simpler' -Albert Einstein- In just the first few chapters of 'Vigilant Ancestor', you will find the existence of ghost spirits and human souls are fully explained and verifiable. It is accomplished by utilizing Albert Einstein's elemental physics in the same style that Dr. Einstein himself has used in so many of his books. It really proves to be that simple. This book is a narrative of lessons told in a 60+-year Tutelary Exemplar, or Guardian Teacher relationship between a Sáami ancestral spirit and the author. Here we find a medicine man Spirit dispensing guidance not just to his apprentice, but, to all people of all races. Sáami/American Author H.D. Rennerfeldt has embarked the reader on an autobiographical voyage into his intellectually enlightened inspirations. Many of the life tutoring is wonderfully intriguing especially the didactic passages on the Jimmy Hoffa disappearance. This is a far cry from the failed attempts by the F.B.I. and the gangsters looking to cash in on a mystery. 'The most incomprehensible thing about the world is that it is at all comprehensible.' -Albert Einstein

ANCESTORS STILL HAVE A LOT TO OFFER

"Your Soul is Immortal, But Your Carcass is Toast"

The soul is a mystery. Scientists and Theologians constantly butt heads on the soul's definitive and can't come to grips with its purpose and actual existence. Yet, the basic framework taught in a High School physics class helps with an explanation of the latter - the existence of the soul.

In our school studies, we learn there are only two class types of particle elements in physics. These are known as the Fermion and Boson elements. We also know that ALL elements VIBRATE at differing frequencies. From this, we learned that all Fermion elements cannot occupy the same quantum state or physical space of other Fermions such as solids like a brick or your head. This explains why you can't waltz through walls.

On the flipside of this, all Boson elements can occupy the same quantum state or physical space as other Bosons and most Fermions. An electric current traveling through a copper wire is a perfect example; however, the current can't pass through glass and rubber or most other insulating type materials. In short, it comes down to solids, liquids and gases contrasted to electrical currents or other similar-classed substances including the ever-intangible soul.

"You are not Flesh & Blood - You are the Master of It"

It is with this knowledge that I equate the soul as being a Boson element and the human body as a Fermion construct. In Sáami folklore, the soul occupies all things, in this case a human body, and provides the life force for that body. In Freudian theory, the good doctor assigned the soul as the psychological placeholder for the Id, the Ego and the Super Ego. In a nutshell, the Id is the facilitator of involuntary bodily functions; the Ego handles cognitive and conscience and the Super Ego channels the personality, the unconscious mind and it also provides a connection with the Ethereal Universe or other realms. I like to think of these as the Holy Trinity of our Spirit. The Id, the Ego and the Super Ego are particularly analogous to the Father, the Son and the Holy Ghost in a non-sacramental sense. This, however, is an exceedingly involved discussion that may require a book of its own.

Regardless of these ideas appearing to be a hodgepodge of suppositions, I think it more than adequately serves well for the purpose as a basic explanation on how "it is not outside the realm of science." When you consider that brain functions are measured by the electrical synapses emitted by the brain, the spectre of your soul being those electrical plasma Boson elements will require more than just a summary push-aside from the 'hard evidence' scientific crowd. As in science, real truth and scientific substantiation is based on continuous and repeatable experiences giving the same results and outcomes every time.

The intangible, as you can guess, creates some decidedly strange and perceived dichotomies for scientific interpretations. Ask a scientist what the definition of electricity is and he might rattle off, " It is the physical phenomena arising from the reaction of electrons and protons... " Note the word " ...phenomena... " in the above statement - it is the key word. It is used as a reference in the philosophical usage rather than as a scientific justification. I'm sure this comment might raise a few eyebrows as The Observation is a crucial tool to scientists, yet, you will notice that if they can't nail it down, or photograph it; expect head rattling skepticism. Don't be bothered by that, skepticism is what science is all about. It keeps everybody honest for as long as the theory can withstand the test of time and experimentation.

This may set me up as a heretic of our modern times and, in the same instance create a strong indict