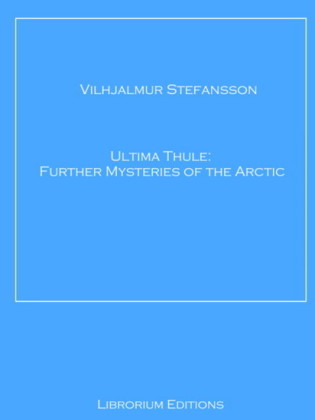 Pytheas, around whom centers the question of Thule, was considered for two thousand years the champion liar of antiquity. After perhaps the most overdue of rehabilitations, he is now in our books and belief an outstanding leader in Greek science and a foremost explorerthe earliest of the known great explorers. If he appears to us less than Columbus in some ways he appears greater in others, particularly as a scientist. He has been referred to as a Columbus with a flavor of Darwin; he appears to have been more nearly a composite of James Cook and Galileo. Vilhjalmur Stefansson (Icelandic: Vilhjálmur Stefánsson) (November 3, 1879 August 26, 1962) was an Icelandic American Arctic explorer and ethnologist. He was born in Manitoba Canada

Did Columbus visit Iceland? The first comeback might be another question: Who cares? Perhaps we had better clear that up first.

Columbus, if listening in, would care about the verdict. For there are few things which he said about himself, or which others have said he said, that have been used so effectively to smudge his character. His claim that he visited Iceland, or the claim that he claimed to have done so, has been now an entering wedge and now a final crushing sledge hammer in numerous and on the whole successful attempts to prove that he was a liar, a braggart, an ignoramus.

Spain cared a great deal about whether Columbus visited Iceland. The kingdom, then a growing power, was trying to gain and to hold control over a new world. They used many arguments to bolster their claim, one of them the contention that no one had known about America, and least of all Columbus, before he "discovered" it as Spain's agent in 1492.

But Europe knew in the fifteenth century that the Icelanders knew about America; it was, therefore, necessary for Spain to show that Columbus could not have known what the Icelanders knew. The first step was to prove that he never saw the place. The statement of Ferdinand Columbus that his father had visited Iceland in 1477 was, in effect, an attack upon the discovery angle of Spain's claim. This attack had to be met and repulsed.

The papacy cared whether Columbus had visited Iceland, or at least the Pope did. For Alexander VI, who came to the Throne of Peter in 1492, was Rodrigo Borgia, a Spaniard. There are few virtues claimed for this pope, but it is claimed for him by historians that he was loyal to his family, therefore to one of the leading families of Spain; and that he was loyal to Spain as his native land. Nothing that tended to weaken the case of Spain for ownership of the New World could have been pleasing to this Spanish Pope.

Then Alexander VI had a personal reason. Most of the crimes, sins and improprieties which we associate with the name of Borgia were even then associated with him and he was in consequence not very secure in the Petrine chair. As the King of Spain needed the support of Rome to make good his claim to the New World, so did the Pope of Rome need the support of the King of Spain to make good his hold on the papacy. Or at least this is so widely believed that even the staid Encyclopaedia Britannica confirms it.

It was, then, nearly as much a concern of the papacy as of the Spanish kingdom that as few as possible, preferably nobody, should believe that Columbus had visited Iceland.

But unfortunately, as it must have seemed by the end of 1493, the pope himself had written a circular letter during 1492 in which he referred to the farthest dominion of the Church, the one beyond the Atlantic-Greenland, which had been a bishopric since 1124.

Strategically, the position of the Church could scarcely have been worse for defending as novel Spain's discovery claim to America. A church historian, Adam of Bremen, had told about the North American mainland in connection with Iceland and Greenland in his book Historia Hammaburgensis Ecclesiae , finished about 1075. The Emperor Frederick II of Hohenstaufen had referred to Greenland as a well-known country in that best seller, De Arte Venandi cum Avibus , which he finished about 1244, extant during the fifteenth century in numerous libraries throughout Europe. That there was land beyond the Atlantic was even so well known that around 1396 the Saracens demanded, and received, Greenland falcons in ransom for a Christian prince whom they ca