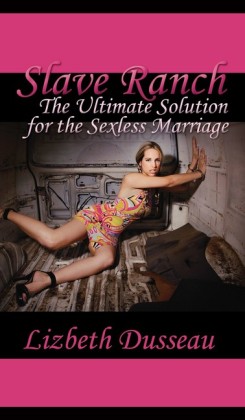 The ad read: Marital Problems? Infidelity? Desperate for the Affection of a Loving Wife? The Ultimate Solution for the Sexless Marriage. Call now for details about our unique program. Within 24 hours, business woman Janet Dawkins is apprehended at the airport by two uniformed men...hours later Roxanna Joyce is brutally hogtied and drugged by her latest one night stand. Early the next morning, the pretty housewife Heidi Sands is accosted by a stranger in her house, abused, bound and taken away. Tired of their sexless marriages, three unhappy husbands have taken extreme action to remedy their situation. Days later, the trio of panicked females are hauled out of a panel truck and dropped in the dirt of the R&T more aptly named Slave Ranch. As the tough, modern day cowboy Marshall Novak explains: they are his newest inductees in an operation to reprogram them as sexy and submissive bedmates for their wellheeled husbands. The voluptuous Roxanna's rebellion is quickly met with the crack of a cane. The controlling Janet intends to coolly foil the diabolical plan. And Heidi suddenly finds a playground where her private and very kinky fantasies will come to life. For six months, the three will be tethered in separate stalls, eat from dog dishes and relieve themselves in a crude latrine. Through the use of special salves and conditioning, they're programmed to find sexual pleasure performing oral sex, to take a fist in their pussies and submit to anal sex as eagerly as they suck cock. The promiscuous Roxanna hardly needs to be trained, but will the show pony ever put out for her sugardaddy husband? Can a controlling Janet ever soften up to sex? Will the once frigid Heidi finally let go and enjoy the kink she loves? What none of the wives or husbands realize is that the program is rarely successful. Two of these females won't be going home. But the cunning Marshall Novak knows this from the start. He wants one of these beauties as his own. Meanwhile, waiting in the wings are wealthy men who'll pay a hefty price to have a submissive female who's trained to perform.

Janet Dawkins finished her business in San Antonio and hopped a quick flight to Houston, arriving at the busy terminal at three in the afternoon. Jostled through the throng of arriving passengers, the pretty brunette in the smart navy business suit headed toward the concourse with her high heels clicking authoritatively on the tile floor. With any luck, she could catch a taxi and be in her hotel room by four, enough time to relax before her business dinner with Jerry Painter at six thirty.

She stopped for a moment to consider her plan, glanced at the airport sign overhead and started off. But before she'd gone a step, two uniformed men approached her, moving so quickly into her personal space that she backed off, alarmed by their abrupt and menacing presence.

"What? Go with you where?" She stared at them dumbfounded. She wasn't a small woman at five-feet seven in her stocking feet, but these men were like behemoths and seemed to grow in size as they made their shocking demand. The larger of the two, a white man with a pasty face, seemed to be in charge. The other, a handsome black man with defined features and shiny dark skin, grabbed her upper arm. Despite being flustered, she wasn't about to submit to them. She tried to shake him off. "Get your hands off me!"

Filled with plenty of bravado and official swagger, the larger man rattled off a bunch of gibberish that Janet did not understand. Before he even finished, the black man had wrestled both hands behind her back, snapping handcuffs on her wrists.

She jerked from the shock, only too aware of those who stopped to watch the fracas. "You can't do this! I demand to know what this is about!" She struggled uselessly to wrench from the large man's grasp, only to be hauled back between the pair and forcefully escorted through the concourse and down to the baggage claim in the lower level. Along the way, dozens of travelers stopped to watch the amazing sight of the pretty brunette jerking and fighting against the powerful strength of her determined escorts.

A hard kick landed against the big man's shin, her stiletto heel jamming into his flesh.

He came back angrily, "You made a mistake there, lady," and he dragged Janet Dawkins into an empty room in the baggage area, and shoved the frantic woman to her knees. The black man popped a ballgag into her mouth and locked its leather straps behind her neck, while the surly brute loomed above her with a small leather slapper in his fist. The odd items seemed to have materialized by magic. Janet stared up, her eyes wide and frightened, tears of panic running down her cheeks leaving a trail of smeared mascara as they went. It finally dawned on her that she was in real trouble - and she still had no idea why.

"These are yer rules, Miz Dawkins," the white man spoke in a Southern drawl. "We ain't gonna hurt you, les you don't behave. You don't, well... " he leveled her with an ominous stare, "I'll upend that pretty ass and give you a licking you'll never forget. Right on your bare behind. You got that clear?"

"You got two choices, Miz Dawkins, you either come along with us all meek and mild, like a good girl and I'll remove the gag, or you fight me, even the least little bit once we're outside this door, and I'll drag you back in here and give you that thrashing I promised. Next time you gonna walk outta this room with the gag in your mouth. Everyone will see it plain as day. That clear?"

The man nodded to his partner, who loosened the gag strap 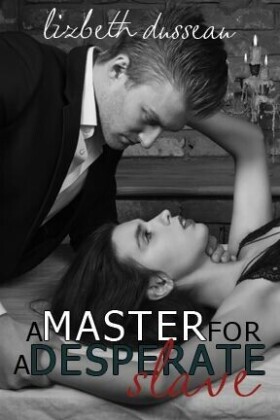 A Master For A Desperate Slave
Dusseau, Lizbeth
3,65 € 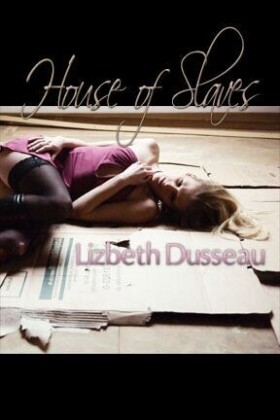