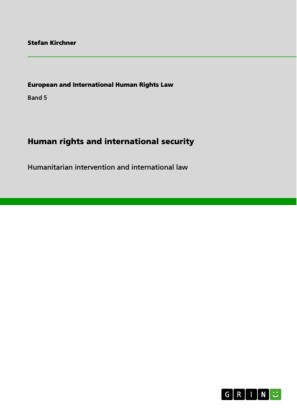 Document from the year 2008 in the subject Law - European and International Law, Intellectual Properties, , 70 entries in the bibliography, language: English, abstract: With the advent of Human Rights in international law, several core ideas of the traditional system of international law have been challenged, such as the principle of non-interference and state sovereignty, as well as the prohibition of the use of force, especially with the decision that massive human rights violations can form a threat to international peace and security to which the UN Security Council can respond with measures according to Chapter VII of the UN Charter. While at first sight a change of paradigm in international law, or in any legal system, is not negative per se, the rules which collide with a truly effective and universal protection of HR through international law are the very rules which form the foundation for international peace and security, the primary reason for the existence of international law. While international peace and security require the stability provided by the Westphalian system, they can at the same time be endangered by massive violations of human rights. On the other hand can Human Rights only be enjoyed in times of peace while the Westphalian system can limit the effective and universal enforcement of Human Rights in cases in which the UN Security Council has failed to take action under Chapter VII. This short book is an attempt at reconciling these needs which are at times direct against each other, at times interlinked ones with a special focus on massive violations of human rights which are not being addressed effectively by the UN Security Council. To this end, we will look at the Human Rights dimensions of international peace and security outlined above before we come to the core issue of the paper, the legality of the use of force for the protection of Human Rights in cases in which the UN Security Council fails to act, or, in other words, the question of in how far the need for universal respect for human rights can overrun the need for peace, given the links between both factors indicated above. RA Dr. Stefan Kirchner, MJI, is an international legal consultant, admitted to the bar in Germany (www.marine-consulting-eu). He has worked at the Law of the Sea Division of the German Foreign Ministry in Berlin and at the German Federal Maritime and Hydrographic Agency. He has been Assistant Professor for the Law of the Sea in Kaunas and Associate Professor for Fundamental and Human Rights in Rovaniemi. After serving as Co-Chair of the Rights of Indigenous Peoples Interest Group of the American Society of International Law he now holds that position in ASIL's Law of the Sea Interest Group.

In October 1994, the United States Immigration and Naturalization Service launched Operation Gatekeeper in an effort to move people away from the migration routes in the San Diego Area. This operation has called for the United States Government to dramatically increase the number of Border Patrol Agents in the San Diego sector and has given military assistance and resources to them. A wall has been constructed which begins in the Pacific Ocean and stretches for 14 miles. The entire northern border of Tijuana is a wall. This strategy of militarization has moved people away from the popular suburban migration routes in the San Diego area and forced people into harsh and desolate areas. People who migrate to California must now attempt their crossing through the Imperial Desert or over the Mountains that are north of Tecate. Despite the hazards of extreme temperatures in the desert and mountains, people have not been deterred from trying to enter the United States to find work. Due to the increased militarization which has pushed these crossing routes into dangerous areas, the number of migrant deaths have increased , however, people are still crossing the border at the same rate. The death rate of the people who are migrating has risen over 600% since 1994. The rate of those who are apprehended by the INS has decreased less than 1% during the same period. Between 1994 and 1999, over 1,500 people have died along the entire U.S./Mexico border, with nearly a third of these deaths occurring on the California/Baja California border. [1] The situation is worsened by the fact that U.S. border guards, as well as civilian U.S. landowners along the border have taken up the GDR-style shooting of persons entering the U.S. from Mexico illegally.

On 6 April 1994 Rwandan president Habyarimana and several high ranking government officials were killed when their plane was attacked nearby Kigali Airport. Within ours the Hutu government systematically attacked the Tutsi leadership and intelligentsia. Within three months, 1 million Tutsis were shot, burned, starved, tortured, stabbed or hacked to death. [2] The international community did nothing to stop the Rwandan genocide [3] which only ended after the military victory of the Tutsi Rwandan Patriotic Front. [4]

In January 2003, the European Court of Human Rights declared admissible six applications from victims of the war in Chechnya against the Russian Federation - the first such admissibility decision on applications concerning the Chechnya war. The six applicants allege that Russian forces violated their and their relatives' right to life in several incidents such as bombing raids and summary executions during 1999 and 2000. [5]

On 12 February 1989 the solicitor Pat Finucane has been shot dead at his home in north Belfast. The killers burst in as he was eating his Sunday dinner with his wife and three children. Two gunmen showered him with 14 bullets and shot his wife in her legs. The hijacked taxi the gunmen escaped in has later been found in the Protestant Shankhill Road area. In the immediate aftermath of the killing Social Democratic and Labour Party (SDLP) politicians have blamed junior Home Office minister Douglas Hogg for his remarks last month about some lawyers in northern Ireland being "unduly sympathetic" to the IRA. Pat Finucane had been involved in the defence cases for 23 men involved with the murder of t 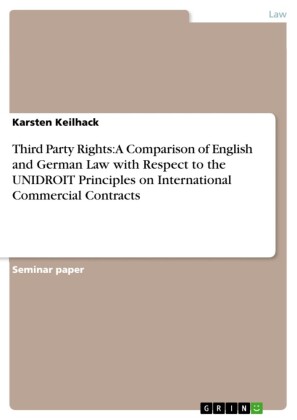 Third Party Rights: A Comparison of English and German Law with Respect to the UNIDROIT Principles on International Commercial Contracts
Keilhack, Karsten
11,99 € 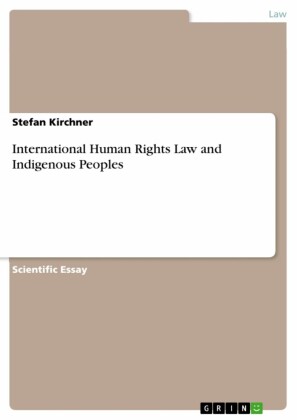 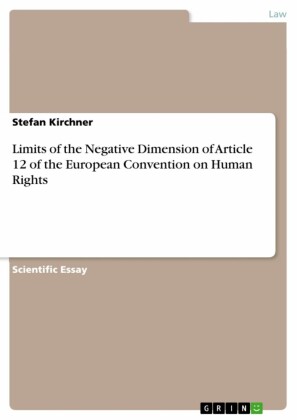 Limits of the Negative Dimension of Article 12 of the European Convention on Human Rights
Kirchner, Stefan
11,99 € 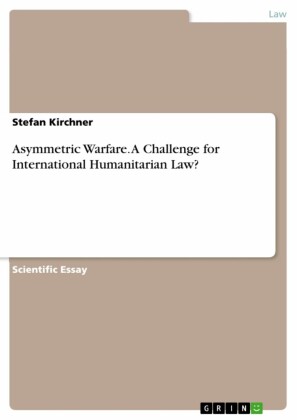 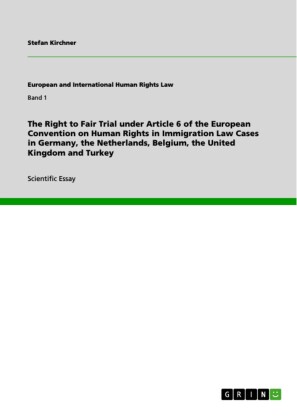 The Right to Fair Trial under Article 6 of the European Convention on Human Rights in Immigration Law Cases in Germany, the Netherlands, Belgium, the United Kingdom and Turkey
Kirchner, Stefan
2,99 € 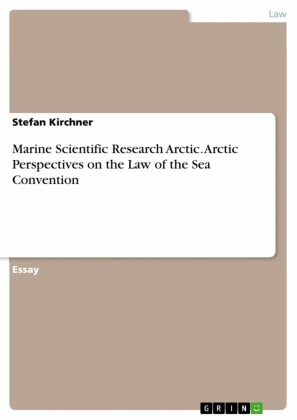