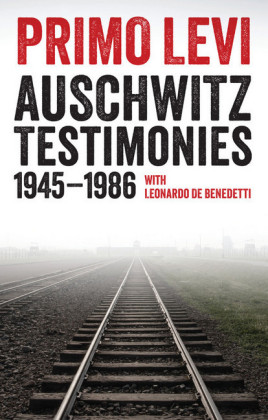 In 1945, soon after the liberation of Auschwitz, Soviet authorities in control of the Kattowitz (Katowice) camp in Poland asked Primo Levi and his fellow captive Leonardo De Benedetti to compile a detailed report on the sanitary conditions they witnessed in Auschwitz. The result was an extraordinary testimony and one of the first accounts of the extermination camps ever written. Their report, published in a medical journal in 1946, marked the beginnings of Levi's life-long work as writer, analyst and witness. In the subsequent four decades, Levi never ceased to recount his experiences in Auschwitz in a wide variety of texts, many of which are assembled together here for the first time, alongside other testimony from De Benedetti. From early research into the fate of their companions to the deposition written for Eichmann's trial, Auschwitz Testimonies is a rich mosaic of documents, memories and critical reflections of great historic and human value. Underpinned by his characteristically clear language, rigorous method and deep psychological insight, this collection of testimonies, reports and analyses reaffirms Primo Levi's position as one of the most important chroniclers of the Holocaust. Primo Levi (1919-87) was born and lived his entire life in or near Turin, with the exception of the years 1944-45, when he was captured as an anti-Fascist partisan, deported to Auschwitz, and then released into war-torn Europe. He was the author of such acclaimed works as If This is a Man , The Periodic Table and The Drowned and the Saved . Leonardo De Benedetti (1898-1983), also a native of Turin, was captured and deported to Auschwitz in the same year as Levi. After liberation, he resumed his work as a physician.

Primo Levi's work has become something of a touchstone of Holocaust writing and of the moral authority of the survivor to give voice to the very worst sufferings of the twentieth century. In 1944-5, Levi spent almost a year battling against the humiliations and deprivations of a prisoner's half-life in Auschwitz - specifically Auschwitz-III, the concentration and labour camp near Monowitz [Monowice] - and nearly another year, following his miraculous survival and liberation, on a tortuous, stop-start journey home from Poland to Turin. His writings first emerged, locally, almost invisibly, in Turin in 1947, starting with the small-scale publication of If This is a Man , a pellucid exploration of the human body and the human mind as it adapted to life, or rather non-life, at Auschwitz. His profile and authority grew a little in the 1950s and 1960s, including glimmerings of an international presence, following the republication of that first book and the appearance of its sister volume, The Truce (1963), the story of his meandering return across the wastelands of post-war central Europe. He continued to write, publish, speak, and all the while work at his daytime profession as an industrial chemist. In a quite unique and unclassifiable book, The Periodic Table (1975), he brought to the page a fizzing chronicle of his life in/through chemistry, overshadowed only occasionally by memories of Fascism, anti-Semitism and genocide. The 1980s brought a step-change in his international reputation, with bestselling translations and lionization in the English-speaking world, crowned by the publication of his final book of essays on the Holocaust and its moral and historical legacy forty years on, The Drowned and the Saved (1986). His death in 1987, almost certainly by suicide, prompted genuine and widespread grief at the loss of such a voice, such a companion in dialogue, such testimony. 1

Levi himself was one of the first and most eloquent writers to embrace the terminology of testimony. It is there, for example, in one of the most powerful passages of If This is a Man (of the 1958 second edition, that is: the passage is not in the 1947 edition): 2 in the very early days after Levi's arrival in Auschwitz, Steinlauf, a former officer of the Austro-Hungarian army and now a filthy shell of a man mired in Auschwitz, teaches Levi his first lesson in the persistence of human dignity:

It grieves me now that I have forgotten his plain, clear words, the words of ex-Sergeant Steinlauf of the Austro-Hungarian Army, Iron Cross in the 1914-1918 war. It grieves me because it means that I have to translate his uncertain Italian and his quiet speech, the speech of a good soldier, into my language of an incredulous man. But this was the sense, not forgotten then or later: that precisely because the Lager was a great machine to reduce us to beasts, we must not become beasts; that even in this place one can survive, and therefore one must want to survive, to tell the story, to bear witness.

That other great Holocaust survivor-writer Elie Wiesel, perhaps the only one who is Levi's equal in terms of the moral force and clarity of their work, eloquently captured the specific power of this vocation for testimony, as a vessel for containing in words the scale and the inhuman extremes of the Shoah: 'if the Greeks invented tragedy, the Romans the epistle and the Renaissance the sonnet, our generation invented a new literature, that of testimony'. 3 As Wiesel's formulation suggests, this new literature of 'testimony' - the writing of and out of suffering, from the bare body of the victim at the edge of death, to the essentially human act of voicing, of stating that 'this happened' (as Levi's poem at the start of If This is a Man bal