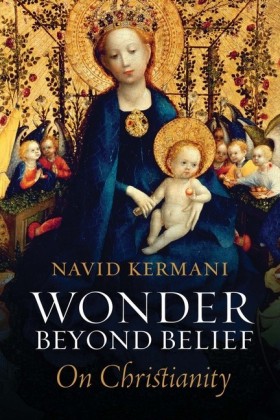 What happens when one of Germany's most important writers, himself a Muslim, immerses himself in the world of Christian art? In this book, Navid Kermani is awestruck by a religion full of sacrifice and lamentation, love and wonder, the irrational and the unfathomable, the deeply human and the divine - a Christianity that today's Christians rarely speak of so earnestly, boldly and enthusiastically. With the open-minded curiosity of a non-believer - or rather a believer in another faith - Kermani engages with Christian art in its great richness and diversity. The result is an enchanting reflection which reinvests in Christianity both its spectacular beauty and its terror. Kermani struggles with the cross, falls in love at the sight of Mary, experiences the Orthodox Mass and appreciates the greatness of St Francis. He teaches us to see the questions of our present-day lives in the pictures of old masters such as Botticelli, Caravaggio and Rembrandt - not with lectures on art history or theology, but with an intelligent eye for the essential details and the underlying relations to seemingly remote worlds, to literature and to mystical Islam. Kermani's poetic school of seeing draws us in as we are carried along by his unique perspective on Christianity, rekindling our interest in great art at the same time. We are captivated by his unique and brilliant Islamic reading of the West. Navid Kermani is a writer and scholar who lives in Cologne, Germany. He has received numerous accolades for his literary and academic work, including the 2015 Peace Prize of the German Publishers' Association, Germany's most prestigious cultural award.

The boy is ugly. He is much uglier than he looks in this picture, or in any of the others that I have found on the Internet or taken myself with the good camera I borrowed. Clicking from one photo to the next, I would even go so far as to say that the boy is downright photogenic, when I remember how ugly he really looks. His mouth, for example, that open mouth: his receding lower and protruding upper jaw; and the lips more so: the lower lip short, or, more precisely, not short, but pressed, extruded into two fat bulges, accompanied by an upper lip pulled upwards like a tent on two strings, spreading out sideways to shelter the corners of the mouth. Because each picture captures only one point of view, they give no more than an inkling of how stupid the boy looks with his gaping lips - really stupid, more than just unbecoming: dimwitted, a mean kind of dimwit with something awkward and boorish about him at the same time, something of a spoiled brat thinking only of himself. It is unpleasant, unsavoury no less, to imagine a kiss, no matter how readily and easily we receive kisses from other children - but from him? There are children like that, five-year-olds who still scratch blithely in their unwiped bum crease and hold out their shit to you. This one has only lost some paint, but precisely on the three fingers that he holds up in blessing, and from the tip of his fingernails past the second knuckle. At first glance he seems about to stick his bent, brown fingers down your throat.

And how round he is - not fat in the sense of overweight, but rounded, his nose wider than it is long, his skin rotund like blown-up balloons. His cheeks look all the more spherical because the retracted lower lip lifts up his ball-shaped chin. In all, his face consists of three - no, four - no, five balls, because his double chin and the tip of his nose are also globular, but the spherical shape of his exaggerated bulk is what you can't see if you look at the boy from a single point of view, that is, in only two dimensions. The two breasts are likewise round, like a woman's, I notice looking at photos of the boy, and the fat encircles his upper and lower arms, forming more balls. A cherub, a mother would call him, believing her child the most beautiful on earth even if he is a paragon of hideousness to anyone else, especially an unbeliever or a believer in a different faith like me. My Catholic friend, whom I asked to go by the Bode Museum on his next visit to Berlin because, in the photos I had sent him, the boy's stupidity is only twodimensional, my friend too conceded on the phone that the last thing he would associate with the boy was beauty, grace, charm.

'Did you see his fingers?'

'I'm standing right in front of him,' my friend whispered.

He had no trouble finding the boy; he just asked the first guard he saw where to find the ugly Christ Child and was shown the way with a grin. All the guards knew it: Fatty is down the corridor to the hall under the smaller cupola, then first door on the left. In the catalogue, meanwhile, there is no illustration of the Christ Child, and even the special catalogue of the sculpture collection contains only a small, almost tiny photo, flatteringly lighted, as if the museum's directors were ashamed of it or did not want to cause any trouble by a kind of blasphemy. Although blasphemy no longer bothers anyone in Berlin, except perhaps some of the Turks. But this boy, and this is the important thing to understand, praises the Father.

The motif of Jesus as a child did not appear in Catholic art until the thirteenth century, my friend digresses, so the sculpture must be a very early, immature specimen. St Francis in particular loved the Christ Child, he explains, and female mystics cherished Him in contemplation and rocked Him in t