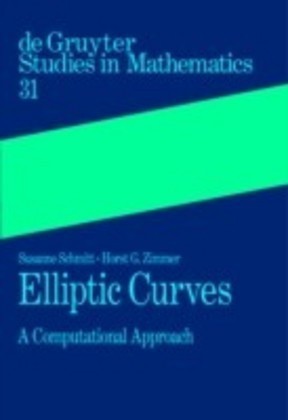 The basics of the theory of elliptic curves should be known to everybody, be he (or she) a mathematician or a computer scientist. Especially everybody concerned with cryptography should know the elements of this theory. The purpose of the present textbook is to give an elementary introduction to elliptic curves. Since this branch of number theory is particularly accessible to computer-assisted calculations, the authors make use of it by approaching the theory under a computational point of view. Specifically, the computer-algebra package SIMATH can be applied on several occasions. However, the book can be read also by those not interested in any computations. Of course, the theory of elliptic curves is very comprehensive and becomes correspondingly sophisticated. That is why the authors made a choice of the topics treated. Topics covered include the determination of torsion groups, computations regarding the Mordell-Weil group, height calculations, S-integral points. The contents is kept as elementary as possible. In this way it becomes obvious in which respect the book differs from the numerous textbooks on elliptic curves nowadays available.
Dr. Susanne Schmitt works at the Max Planck Institute for Computer Sciences at Saarbrücken, Germany. Horst-Günter Zimmer is Professor at the Mathematics Department of the University of the Saarland at Saarbrücken, Germany.