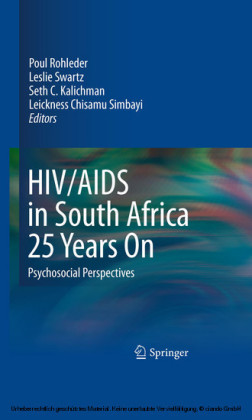 HIV/AIDS in South Africa 25 Years On

Much has happened since the first appearance of AIDS in 1981: it has been identified, studied, and occasionally denied. The virus has shifted host populations and spread globally. Medicine, the social sciences, and world governments have joined forces to combat and prevent the disease. And South Africa has emerged as ground zero for the pandemic. The editors of HIV/AIDS in South Africa 25 Years On present the South African crisis as a template for addressing the myriad issues surrounding the epidemic worldwide, as the book brings together a widely scattered body of literature, analyzes psychosocial and sexual aspects contributing to HIV transmission and prevention, and delves into complex intersections of race, gender, class, and politics. Including largely overlooked populations and issues (e.g., prisoners, persons with disabilities, stigma), as well as challenges shaping future research and policy, the contributors approach their topics with rare depth, meticulous research, carefully drawn conclusions, and profound compassion. Among the topics covered: The relationship between HIV and poverty, starting from the question, 'Which is the determinant and which is the consequence?' Epidemiology of HIV among women and men: concepts of femininity and masculinity, and gender inequities as they affect HIV risk; gender-specific prevention and intervention strategies.
The impact of AIDS on infants and young children: risk and protective factors; care of children by HIV-positive mothers; HIV-infected children. Current prevention and treatment projects, including local-level responses, community-based work, and VCT (voluntary counseling and testing) programs. New directions: promoting circumcision, vaccine trials, 'positive prevention.' South Africa's history of AIDS denialism. The urgent lessons in this book apply both globally and locally, making HIV/AIDS in South Africa 25 Years On uniquely instructive and useful for professionals working in HIV/AIDS and global public health.