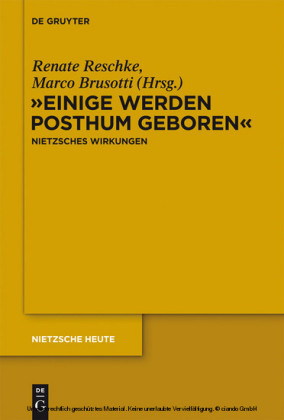 Nietzsche's thinking is unparalleled in its contradictory effects and it continues to be relevant. Even today, opinions on him diverge strongly. Throughout the 20th century, philosophies, art movements and political ideologies have oscillated between euphoria and condemnation, affirmation and an ignoring silence. Incorrect and abusive readings in fascist and Stalinist circles perverted his ideas and utopias. After 1945, historically and critically informed approaches in philosophy, the arts and the media provided initially cautious insights into the diversity of the interpretations of his thinking; this field of activity intensified towards the end of the century.
Renate Reschke , Humboldt-Universität zu Berlin; Marco Brusotti , Università Lecce, Italien.